Ireland had four crews competing at the second day of the 2021 European Rowing Championships in Varese. The Lightweight Women’s Double and Lightweight Men’s Double qualified for their A Final on Sunday. The Men’s Double will be competing in the B Final and the Men’s Single in the C Final. There are six Irish Crews in A Finals on Sunday.

The Lightweight Women’s Double of Aoife Casey and Margaret Cremen finished second in their A/B Semi-Final. The Irish crew fought hard and beat the Russian boat to claim second place and finished just behind the Italian boat. Aoife and Margaret finished with a time of 07:14.44 and progressed to the A Final on Sunday.

Current World Champions Paul O’Donovan and Fintan McCarthy won their A/B Semi-Final in the Lightweight Men’s Double Sculls. Paul and Fintan led from the front from early in the race and beat the Italian crew for the win for the Irish boat. Paul and Fintan finished with a time of 06:22.74, which was the quickest time for all 12 crews across the two semi-finals. Paul and Fintan will race in the A Final on Sunday.

The Irish Men’s Double of Philip Doyle and Ronan Byrne finished sixth in their A/B Semi-Final. Ronan and Phil were racing against crews from Italy, Romania, Great Britain, France and Switzerland. The French boat won the A/B Semi-Final after leading from the start with Great Britain and Switzerland taking the other spots for the A Final. Ronan and Phil will race in the B Final on Sunday and they finished with a time of 06:21.38.

Daire Lynch finished second in the Men’s Single Scull C/D Semi-Final. Daire faced competitors from Russia, Serbia, Israel and Cyprus. Daire finished behind the Russian sculler with the Cypriot boat taking third. Daire finished with a racing time of 07:03.22 and will race in the C Final on Sunday morning.

RTE will be covering Sunday’s A Finals on the RTÉ Player and will have a highlight show on Sunday evening. 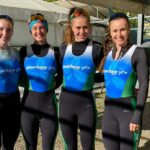