The day began with the Mixed Double of David Hussey and Miriam Sheehan. Drawn against a crew from Great Britain, the crew from Ireland missed out by seven seconds meaning that they will not proceed any further after making it to the final 16 crews.

Next up was Kealan Mannix in the Men’s Single. With a large number of entries, there was two rounds of time trials for this event. Kealan came 9th overall in the round two time trial narrowly missing out on the top eight qualifying spots, being just .7 of a second behind the sculler from Portugal.

Niamh Doogan, Dineka Maguire, Noel Creedon, Kealan Mannix and Cian Sweeney raced the quarterfinal of the Mixed Coxed Quad. Unfortunately, the crew from France finished ahead which means they they also don’t progress any further in the competition.

Tomorrow will see the Women’s Scull and Junior Men’s Double race their respective repechages and quarterfinals. Links to live stream and live audio can be found on the World Rowing website HERE 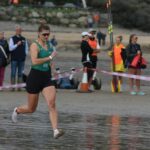 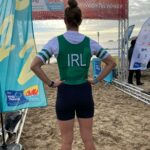