Day one of racing has finished up for Ireland, as the first six crews completed their heats. Two crews have progressed to the Repechages and four are into the Quarter Finals. A strong tailwind led to tricky conditions for racing today, but is due to get better for the remainder of the week.

Brian Colsh of University of Galway Boat Club, was first to take to the water this morning. In July, Brian won a bronze medal along with Konan Pazzaia in the Men’s Double at U23 Worlds. This week he’s stepping up to the Senior stage in the Men’s Single. Up against the Olympic Champion, Stefanos Ntouskos from Greece, Brian had a strong race and held his third place position throughout the race. With three to qualify straight into the Quarter Finals, that was all Brian needed. He will race again on Wednesday morning.

Another medallist from the U23 World Championships making their Senior debut, is Fermoy’s Alison Bergin. Alison won bronze in the Women’s Scull in July, she’s now back in the scull going head to head with the best in the world. The sculler from Chinese Taipei did not start which reduced the heat down to a five boat race. Alison finished in fourth place with a time of 07:48.85. It was only one sculler to progress from each heat straight into the A/B Semi, so she will race the repechage tomorrow.

Queens University Belfast athlete, Hugh Moore, raced the Lightweight Men’s scull and goes straight into the Quarter Final after a fourth place finish. Four scullers qualified for the Quarter Final Hugh finished with clear water ahead of James McCullough from the USA in fifth position.

An impressive race from Lydia Heaphy in the Lightweight Women’s Scull had her just 0.74 of a second off of first position, and direct qualification to the A/B Semi. Nazanin Malaei from Iran took a strong lead, staying in first position until the final quarter of the race. Lydia and the Mexican sculler made a massive push, lifting their rates to over 40 strokes per minute. Unfortunately, only one sculler got to go straight into the A/B Semi so Lydia narrowly missed out.

The Lightweight Men’s double Olympic Champions have continued their success, winning their heat, qualifying directly into the Quarter Final on Wednesday. The crew from the Czech Republic flew off the start, leading the rest of the field through the 1000m mark. Paul and Fintan held their pace and broke through the Czech crew at this point. From there, the Cork rowers pushed ahead and won their heat with a time of 6:15.11. They race the Quarter Final on Wednesday morning.

A new combination of the Men’s Double, of Phil Doyle and Konan Pazzaia, had its first outing in the heats. Konan was in the bronze medal winning double with Brian Colsh at the U23 World Championships. Ireland had a strong start, leading the group to the first 500m. As the race unfolded, the Lithuanian double pushed ahead but both crews continued to break away from the remaining crews. Phil and Konan finished in second place, 24 seconds ahead of the Serbian crew that came third. This position qualified them directly into the Quarter Final. 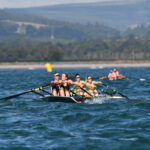 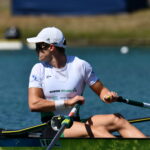