Katie O’Brien is the 2022 PR2 W1x World Champion! The first day of finals has gone off to a good start with a gold medal in Ireland’s pocket already.

O’Brien showed fierce strength from her very first stroke, nudging her bow ahead of the other scullers. She was the fastest moving boat throughout the race, increasing her lead with each quarter. Up against the previous World Champion, Katherine Ross from Australia, Katie knew that it would be no easy feat. Katie finished in a time of 9:25.23, ten seconds ahead of Australia in second place. This is the first time that Katie has beaten Ross. It’s straight back into focus now for Katie as she heads into the PR2 Mixed Double A Final tomorrow afternoon with Steven McGowan.

Zoe Hyde (Killorglin RC) and Sanita Puspure (Old Collegians) returned to the water today for the A/B Semi of the Women’s Double. After a quick start, the double form Ireland were the first to reach the 500m mark, staying bow ball to bow ball with Laila Youssifou and Roos de Jong of the Netherlands, right up to the halfway point. The Dutch crew began to pull away creating a length’s lead on Ireland, but Zoe and Sanita stepped it up another gear in the final quarter of the race, to finish less than a second and a half behind them. They race again this Sunday in their A Final.

Lydia Heaphy (Skibbereen RC) finished in third place in the Lightweight Women’s Scull B Final, ranking her ninth in the world. Crossing the first marker in fifth place, Lydia pushed on through the race finding speed and moving through the rowers from Spain and the USA to take that third position.

Hugh Moore finished up his World Championships with a third place in the D Final of the Lightweight Men’s Scull. Similar to Lydia’s race, Hugh started behind and gradually came through his competitors, to take third position. Off the start, the Finnish and Tunisian scullers were ahead but by the 1500m mark, Moore had moved ahead. He finished behind Lukasz Sawicki from Poland and Oscar Peterson from Denmark. 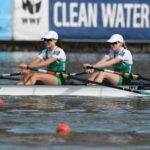 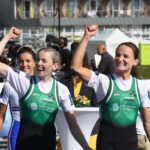