World Rowing U23 Championships – Day One

Today, there were three Irish boats competing at the World Rowing U23 Championships in Racice, Czech Republic. Five Irish crews will be competing on Thursday.

Ross Corrigan, John Kearney, Alex Byrne and Jack Dorney competed in the M4- race, finishing in second place to secure their spot in the A/B Semi-final on Saturday. The crew raced alongside Russian, Czech, Italian, Hungarian and Canadian boats, placing less than one second behind Canada, with a final time of 06:00.26.

Hugh Moore finished third in the LM1x heat with a final time of 07:15.31. Hugh faced tough competition from Italy and Denmark, who finished first and second, respectively. Hugh will now race in the repêchage on Thursday afternoon.

Brian Colsh was competing in the M1x Reserve race today. Brian won the race beating other reserve boats earlier in the afternoon. Brian is the reserve for the coxed Men’s Four for the World Rowing Under 23 Championships. 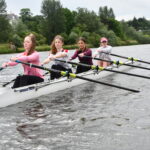 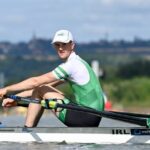