Five boats competed in the World Rowing Under 23 Championships today, in Racice, Czech Republic. One crew is confirmed for an A Final, two crews for A/B Semi-Finals and three are to compete in Repêchages on Friday.

Cliodhna Nolan raced in the Lightweight Women’s Single Sculls heat, finishing third with a final time of 8:03.81. Cliodhna had a strong start but was overtaken by Russian and Dutch boats at the 1,500-metre mark. Cliodhna will race on Friday morning in the repêchage.

Eoin Gaffney and Rory O’Neill competed in the Lightweight Men’s Double heat, finishing fourth with a time of 06:47.52. The pair faced crews from Germany, Italy, Switzerland and Canada, with the Germans taking the win. Eoin and Rory will race in the repêchage on Friday morning.

Alison Bergin competed in the Women’s Single Sculls heat. Alison was competing against crews from France, Egypt, Switzerland and Austria. Alison finished second behind the Swiss sculler with a time of 07:54.63. Alison will now race in the repêchage on Friday morning.

The Men’s Coxed Four of Finn O’Reilly, Andrew Sheehan, Ryan Spelman, Adam Murphy and Leah O’Regan (cox) finished second in their preliminary race. The Irish crew finished just behind the boat from the USA and held second throughout the 2,000 meters. The race was for the lanes, and the top two crews of the USA and Ireland will now be racing in the more favourable lanes for the A FInal. They finished the race with a time of 06:18.00.

Hugh Moore won his race in the Lightweight Men’s repêchage. Hugh beat scullers from Brazil, Tunisia, Serbia and Azerbaijan to seal first place. The Mexican sculler withdrew due to medical reasons before the race. Hugh finished with a time of 07:18.48 and progressed to the A/B Semi-Final on Saturday morning. 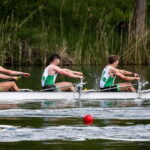 World Rowing U23 Championships - Day One