Where does the race take place?

The Lightweight Men’s Double Sculls A Final takes place in the Sea Forest Waterway in Tokyo.

What time does the race take place?

Who is representing Ireland?

A decorated duo, Fintan and Paul have dominated the field this year winning gold at the 2021 European Rowing Championships in Varese as well as the 2021 Rowing World Cup II, in the Lightweight Men’s Double Sculls, held in Lucerne, Switzerland.

One of Ireland’s greatest athletes, Paul won the silver medal, alongside his brother Gary, at the 2016 Olympics in Rio and has since won four consecutive gold medals at the World Rowing Championships; in the Lightweight Single Scull in 2016 and 2017, and in 2018 and 2019 in the Lightweight Double with Gary (2018) and Fintan McCarthy (2019).

The Skibbereen native, who has been rowing since 2001 also won gold at the 2017 European Championships in the Lightweight Double alongside his brother Gary.

Fintan, who also hails from Skibbereen, won his first title in 2016 and made the European Championship final in 2019 with his brother Jake. The 24-year-old also won the bronze medal in the Lightweight Men’s Single Scull at the European Rowing Championships in Poznan

How did they reach the final?

In their opening heat on day two of the competition, Paul and Fintan, finishing five seconds clear of second-placed Czech Republic in a time of 6.23.74.

In the semi-final the duo first found themselves being led by the Italians however they launched a sustained attack lead Italy by half a canvas at 1000m, and the two crews had clear water on the rest of the field.

Paul and Fintan pushed on to cross the line rating 40, and led Italy by more than a length lead as they qualified for tomorrow’s final together with third-placed Belgium. Ireland’s time of 6 mins 5.33 secs shaved just 0.03 sec off the previous best time set by South Africa at the world championships in 2014

Who are they facing in the final?

Paul and Fintan will face rowers from Czech Republic, Italy, Germany, Uruguay and Belgium in the Lightweight Men’s Double Sculls A Final.

The pair of course won their A/B semi-final however they faced stiff competition from the Italian duo of Stefano Oppo and Pietro Ruta, who finished second and will likely be ones to watch in the final once again.

The other semi-final was won by Jason Osbourne and Jonathan Rommelmann of Germany who finished almost four seconds clear of Uruguay and will add to a stacked A Final field.

The weather is once again set to be very warm in Tokyo tomorrow, around 29-30 degrees celsius in the morning when Paul and Fintan take to the water, with partial clouds and sun throughout the morning.

What are the athletes saying?

“We should have a good chance of winning – and that is nice. Anything could happen. Even on the day. It’s focussing on the day to day, and whatever happens is meant to happen, whether we win or not.” – Fintan McCarthy speaking to The Southern Star.

“Our goal is to just go as fast as we can and if we can win the gold medal, then, that’s great, and if we don’t but we still gave it our best shot, then we’ll be kind of happy with that” – Paul O’Donovan speaking to The Irish Mirror. 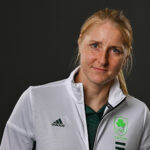 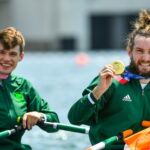