In the spirit of recommended longer pieces – a full Concept II indoor rower marathon – 42,195m – was targeted as a challenge for as many as possible of our Neptune Rowing Club Men’s Master group.

Quite a few of us had rowing machines at home and we were already doing two Zoom erg sessions per week with coffee and chat after Sunday’s session!

There are over twenty active competitive Men’s master’s members (aged 48-65) in this group – with a further few sitting on the fence – and thirteen of us took up the challenge.

This motley crew is made up former Olympians, World championship senior and Junior representatives with a vast number of senior Irish championship winning pots won back in the day numbering 69!  We have plenty of expert coaches which can lead to a lot of opinions in the boat!

Our main chosen charity was Barretstown Children’s Hospice. Money was raised from within the group only for this occasion. If certain splits/times were beaten, then more money was thrown into the pot.

Good Friday was chosen as D Day. We agreed to do the challenge without Zoom as it was just adding to the pressure and trying to finish first etc. All screenshots were to be posted by 1pm and we met up at 3pm to share our stories.

I am rowing now for 47 years and although I have completed eight running marathons -I have never rowed a full marathon on the indoor rower before.

The magic 500m target split time to beat and gain more money for the pot was bettered by no less than seven of the group with the remainder doing well indeed.

Finally, to say that we managed to raise over seven thousand euro to which all went towards our chosen charities. It got our guys through the bleak winter lockdown in such a positive way.  I cannot think of a better way to help others in need along with maintaining our fitness and wellbeing. 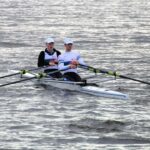 Update on restrictions for affiliated rowing clubs in NI 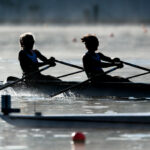