Ireland sent eight crews to compete in the 2020 European Rowing U23 Championships in Duisburg over the weekend. We are delighted to say that Ireland is coming back with 5 medals- 2 Gold, 1 Silver, and 2 Bronze.

Lydia Heaphy and Cliodhna Nolan secured a Gold Medal in the A Final of the BLW2– on Sunday afternoon. Nolan and Heaphy held off the competition from Germany and Italy to secure Gold. Lydia Heaphy, said to World Rowing, “The race was very tight for the first 1000m, and we managed to pull away from the pack. Down the stretch, we executed pretty well and are quite happy with the result.”

The BM2x Crew of Ronan Byrne and Daire Lynch also finished 1st in the A Final. They have been consistent from the very beginning winning first in their heat and the semi-final. The BM2x crew beat out the Belarus boat for gold, by 3.93 seconds.

The BLW2x- crew of Margaret Cremen and Aoife Casey finished 2nd in the A Final, staying consistent throughout the entire race. The crew remained ahead of Germany (Bronze) from the beginning, finishing with a time difference of 6.78 seconds.

The BM4+ crew of Alex Byrne, Ross Corrigan, Jack Dorney, John Kearney and Leah O’Regan finished 3rd in the A Final taking home the Bronze Medal, the crew raced strongly from the start and there was only .64 of a second between second and third..

The BW2- crew of Tara Hanlon and Emily Hegarty also finished 3rd in their A Final, beating out Czech Republic (4th) by 3.35 seconds! They won the Bronze medal finishing behind the Romanian and Greek crews!

Rowing Ireland’s High-Performance Director, Antonio Maurogiovanni said, “We are delighted with the results from our crews at the 2020 European Rowing U23 Championships. Winning two Gold, one Silver and two Bronze medals is an excellent result for Irish Rowing this weekend. We entered eight crews, and all of our athletes represented Ireland proudly throughout the weekend. We had seven crews progress to the A Final in their categories, and this is a testament to the effort that was put in during training in the National Rowing Centre by the athletes over the last few weeks.

I want to thank all the athletes, coaches and support staff for all their hard work in preparation for this weekend. I also want to thank all the National Team Athlete’s clubs for their support in coaching and helping these young rowers and also all the parents for their patience and passion. We now look forward to continuing this journey at the European Rowing Junior Championships at the end of the month and at the Senior European Rowing Championships in October.

BLM4X- Hugh Sutton, Hugh Moore, Eoin Gaffney, and Will Ronayne: Finished Fifth in the A Final with a time of 06:13.31

You can support our athletes by donating to Greenblades.

Greenblades is a fundraising platform set up by Rowing Ireland in 2019 to help support the athletes that are selected to represent Ireland. Our Junior athletes will be competing at the European Rowing Junior Championships in Serbia on the 26th/27th September. 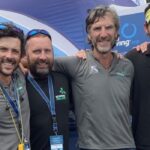