Five Irish crews competed in the second day of rowing at the Olympics at Tokyo’s Sea Forest Waterway. One A Final, two A/B Semi-Finals, one Quarter-Final and two Repechages are confirmed after the results this morning.

Paul O’Donovan and Fintan McCarthy dominated the field in the Lightweight Men’s Double Scull in the opening heats of their Olympic campaign, finishing five seconds clear of second-placed Czech Republic in a time of 6.23.74, to progress to the A/B Semi-Final. Uruguay’s Bruno Cetraro Berriolo and Felipe Kluver Ferreira were first to show in the lightweight men’s doubles and reached 500m more than a second clear, despite McCarthy and O’Donovan rocketing off the start at 53 strokes a minute. But the Uruguayans had front-loaded their race and quickly ran out of steam, while the world champions eased into the lead and never let go.

The Women’s Four of Emily Hegarty, Fiona Murtagh, Eimear Lambe and Aifric Keogh were equally impressive, finishing second and qualifying for the A Final in a time of 6.28.99 – just 0.23 seconds off first-placed Australia, who posted an Olympic-best time of 6.28.76. Australia were the pacemakers in the women’s fours, but the W4- crew refused to let go, with less than a second separating the two fours at halfway, where Romania were five seconds off the pace in third. A punishing third quarter saw Ireland draw up alongside the race leaders, but despite Hegarty raising the rate to 40 the Australians continued to lead.

In the lightweight women’s double sculls the European champions, Italy’s Valentina Rodini and Federica Cesarini, were first off the blocks ahead of France and Switzerland, with Ireland’s Aoife Casey and Margaret Cremen back in fifth place. But the French, who had won bronze at the Lucerne round of the World Cup, overhauled the Italians with a sustained push at 1500m,  and the pressure from Switzerland and the USA saw the leading crews draw further away from Ireland. Race winners France qualified for the semifinals with second-placed Italy, while Casey and Cremen will join the remaining crews in Sunday’s repechages.

The Men’s Double of Philip Doyle and Ronan Byrne kept their Olympic hopes alive, finishing third in their repechage, and will now compete in the A/B Semi-Final on Sunday morning. Byrne and Doyle went out hard on the heels of Germany’s Stephan Kruger and Marc Weber, with just a canvas separating the two crews after 500m. The pace forced the Czech Republic back into third place, while the Lithuanian double of Saulius Ritter and Aurimas Adomavicius slipped off the pace.

The Czech’s lack of experience began to show and they slipped back down the field by 1500m, and while Germany qualified safely, despite repeated challenges from Lithuania, Doyle and Byrne held on to third and a place in the semifinals.

Meanwhile the Women’s Pair of Monika Dukarska and Aileen Crowley will compete in the repechage on Sunday morning after finishing fourth in their heat. Crowley and Dukarska were looking steady in third until the last 250m when Spain’s Aina Cid and Virginia Diaz Rivas launched a final charge. Despite raising the rate to 43 strokes a minute Ireland were forced back into fourth and will have their second chance in Sunday’s repechage.

The event schedule was adjusted today to allow for a rescheduling of races that were set to take place on Monday, due to the expectation of strong winds. The saltwater course is changeable, with conditions unpredictable, a contrast from the calmer, 30-degree weather experienced over the first two days.

Speaking after the race, Olympic Silver Medallist Paul O’Donovan said: “We won the race, so it’s hard to do much better than that – you don’t want to win by 20 seconds either, because it’s very hot out there. It was still tough, all the races at this regatta will be tough. But it’s difficult to complain with that result.”

Commenting on the changeable conditions, Fintan McCarthy added: “I reckon we row in all sorts of conditions in training and we are used to adapting to whatever condition is thrown at us. It’s about being adaptable and doing what we do in training.”

Speaking to Team Ireland, Tara Hanlon, reserve for the Women’s Four, said: “It’s unbelievable to see the girls out there, seeing them in training each day, then going out on the water and showing what they’re made of. Coming up against Australia, it just shows their calibre, 0.2 seconds, there was nothing in it at the finish line.” 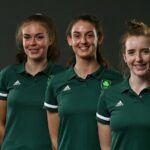 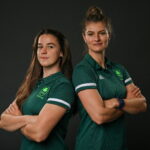