The Junior Men’s Double of Zach Meegan (Athlone BC) and Shane Rafferty (St Michaels), managed to take home the gold medals on both days of racing. Placing second in their heats on both Saturday and Sunday, set them up to race in the A Finals later on in the afternoon. In Saturday’s final, the Irish crew went out fast leading to the first 500m, but slipping back into third position through the halfway mark. This didn’t last long as Zach and Shane moved up a gear, and led the field from the 1500m to the finish. The following day the crew had a similar race in the final, sitting in second position up to the halfway mark and pushing out ahead after that. Coming home with two gold medals in their pockets, there looks to be a bright future ahead for these junior rowers.

The Junior Women’s Four had an unlucky heat on Saturday, missing out on the A Final by a second. The crew of Ranya Praxmarer (Galway RC), Alannah O’Donoghue (Sligo RC), Kelly Oforji (Skibbereen RC) and Amy Barrett (New Ross BC) were the fourth fastest boat out of the heats, but they were into the B Final later that afternoon. They led from the start line and held their position right through to the finish, winning the B Final against the Netherlands by seven seconds. For Sunday’s racing, the girls came second in their heat, securing their spot in the A Final. They finished out the weekend with a sixth place finish.

Rohan O’Hara Nolan of Sligo Rowing Club put on an impressive showing in the Junior Men’s Single Sculls, qualifying for the A Final on both Saturday and Sunday. Rohan placed third in both heats to qualify for the medal race. On Saturday he finished up in fifth place and on Sunday he came in in sixth.

The final crew was the Junior Men’s Coxed Four of Christopher O’Donovan (Skibbereen RC), Harry Feeney (Carlow RC), Andrew O’Leary (Pres RC), James Young (Cork BC) and coxed by Noah Giltinan (Pres RC). The Irish crew qualified for the A Final on both days after strong performances in their heats. On Saturday the boys came second in their heat to the Hungarian four. They finished sixth in the final with only three seconds separating fourth place and sixth place. The following day they won their heat and finished fifth in the A Final, again with very tight margins, with less than ten seconds separating all of the crews. 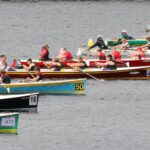 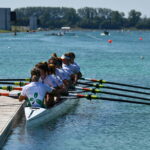