Eimear Lambe (Old Collegians), Tara Hanlon (UCC RC), Aifric Keogh (DULBC) and Natalie Long (Lee Valley RC) have started the A Finals on a high, winning a silver medal in the Women’s Four. With four more A Finals tomorrow, there could be more medals lined up to come back to Ireland.

First up today was Fiona Murtagh (NUIG BC) and Emily Hegarty (UCC RC) in the Women’s Pair. The girls went out hard staying within touching distance of third place through the halfway mark. The Romanian pair of Ioana Vrinceanu and Denisa Tilvescu put on a major push at this point, moving through Great Britain and the Netherlands. The Irish crew kept their heads down and continued to hold their pace through to the finish, crossing the line in fourth place ahead of Croatia and Greece.

The Women’s Four managed to bump up their bronze medal position in World Cup II, to a silver medal position today at the European Championships. Right from the start buzzer, the Irish crew stuck their bow ahead of the rest of the field. The GB four that won at both World Cup I and World Cup III just managed to pull ahead of the Irish crew in the second quarter, but didn’t go far. Eimear, Tara, Aifric and Natalie stayed on GB, only allowing a two second gap to develop and continued to hold off the crews from Romania and Denmark, despite their last minute surge for the line. The Irish were taking the silver medals, with a time of 6:52.99.

“I am very proud of this group of eight girls. The W4- and W2- improved on their performance compared to World Cup II relative to the rest of the field.” said Giuseppe De Vita, Senior Women’s Head Coach. “I feel very sorry that we didn’t get to see the W2x and W8+ which, I am sure, would have been very competitive. As coaches there’s nothing more that we can ask for than a steady, consistent improvement up to the major event, and this group is consistently growing therefore I am very thankful and grateful of all of them, for their trust in the program.”

The remaining A Finals take place tomorrow for the Para and lightweight boats. All races will be played live on RTE2 and on the livestream available on the World Rowing website. 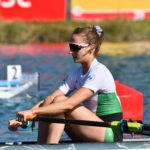 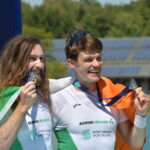