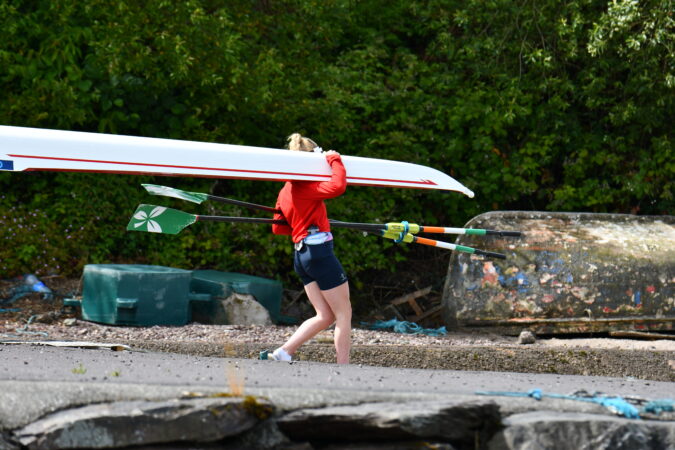 Rowing allows people the opportunity to be part of a great team while participating in a fiercely competitive non-contact sport. This makes our sport very attractive to all ages, genders, and particularly to parents who are concerned about their children being injured while playing contact sports. Rowing is also an activity that can be enjoyed as a leisure pursuit.

Rowing has a long competitive season with a relatively short closed season, meaning that it has an almost year-round profile.

The Domestic Competition calendar falls into two specific categories; The heads can only be held between 1st Oct to 31st March and the regatta season is 1st April – 30th September.

Ireland have competed at the highest level on the world stage. We are currently ranked second in the World for Olympic Boat Classes and have seen consistent and continuous success over the last number of years.

There are four rowing disciplines that Rowing Ireland oversee:

The rowing boats you might have seen on rivers and lakes throughout the country are the same type of rowing boats that have featured in every Olympic Games since 1900. Ireland first competed in the 1948 Olympics and registered with FISA (World Rowing) the evening before this competition.

The boats (or ‘shells’) generally have one, two, four or eight seats, and are classified according to the number of rowers and whether they are ‘sweeping’ or ‘sculling’.

Coastal rowing is offered in many areas around the coast and also on some lakes. The equipment used can vary considerably from area to area with traditional boats which have been used for centuries in some cases. In addition, coastal rowers also race in a standard design boat which permits crews from different communities to compete without the crew being disadvantaged by different designs.

Crews race over different distances depending on the event. The short course is 800m, the middle-distance course is 1,500m and the multi-turn course 2,300m.

Offshore rowing is the extreme version, the adventure side of rowing. It involves rowing along a sea coast and out into the sea and is one of the fastest growing communities of rowers. Offshore rowing boats are also used inland on some lakes and rivers where the water tends not to be flat.

Offshore rowing is often easier to learn than flat-water rowing, due partly to the stability and robustness of offshore rowing equipment which differs from the Olympic-style boats. The standard boats are singles (or solo), doubles and coxed quadruple sculls. But just knowing how to handle an offshore rowing boat is not sufficient to become a good offshore rower. Crews must be aware of tides and currents, learn about the course’s topography and know what to do in the midst of maritime traffic and in case of bad weather.

Also known as Ergometer rowing (or erg) after the name of the equipment used for this type of sport, it has been widely used in the training and preparation of athletes for many years. Recently, indoor rowing has grown from a tool for off-the-water training for the serious rower to a sport in its own right.

The ergometer has become the standard tool for judging a rower’s speed over 2000m. It has become a fixture in boathouses and gyms around the world and is widely used by athletes of other sports for cross-training.

The rowing ergometer is also commonplace in fitness centres, introducing non-rowers to the rowing action and helping to create a sport in itself.

Boats or shells were traditionally made from wood but are now mostly fabricated from carbon fibre and plastic. They are 59.7 – 62.2cm wide and lengths vary depending on the number of athletes in the boat. A small fin is attached at the bottom for stability. A rudder is attached to the fin or the stern (except on sculling boats). A white ball is attached to the bow – the end that crosses the line first (safety measure, photo finish). A washboard prevents waves from splashing water aboard. Seats are fitted with wheels which slide on runners or tracks.

The oars are hollow to reduce weight and attached to the boat by adjustable outriggers. The size and shape of oars is unrestricted, the average length of a sweep oar being 12 feet 6 inches and of a scull being 9 feet 9 inches.

There are eight boat classes, five are for sweep-oared rowing (where the rower uses one oar with both hands), and three are for sculling (where two oars are used, one in each hand). Some classes carry a cox, who either sits in the stern or lies in the bow, to steer the boat.

The eight classifications are:

The + donates a cox and – donates no cox.

The format is usually broken into four rounds:

There are normally eight buoyed lands, with six used for racing. Each lane has a width of 13.5 meters.

The lane position of crews in the heats is determined by a draw before the beginning of racing. The best crews in the semi-finals and finals would normally compete in middle lanes, 3 and 4.

A seeding panel determines the top crews in advance so that, when the final draw is made, the top crews do not compete against each other in the same heat. Seeded crews usually race in middle lanes 3 and 4.

Rowing has been one of the most successful Irish sports over the last number of years. Our national crews have won 27 medals at the World Championships; 10 gold medals, 9 silver medals and 8 bronze medals.