It was a short day for Team Ireland at the U19 and U23 World Championships today. Two crews raced this morning, the JM2x of Ciaran O’Sullivan and Fergus Bryce, and the BW1x of Alison Bergin.

The Junior Men were very unlucky in their quarterfinal, narrowly missing out on a spot in the A/B Semi. In one of the closest races of the day, there was only .4 of a second separating second and fourth place. With only three boats to qualify for the A/B Semi, it was the Irish double that missed out. Ciaran and Fergus raced to the line and put down a strong time of 6:25.91, the fifth fastest time out of the quarterfinals.

Alison Bergin stormed her A/B Semi, taking the win and qualifying for the A Final. Passing the 1500m mark in third position, Alison put in a major push for the last stretch, coming through the crews in first and second place. Alison was up against the 2021 U23 World Champion, Alexandra Foester, and beat her newly set World Record from earlier in the week. Alison’s record now sits at a time of 7:24.89, 2.12 seconds faster than Foester’s record.

Tomorrow is the final day of racing for the U23’s, and all four Irish crews are into the A Finals. Race times are below and live video streaming will be available for all races on the World Rowing YouTube HERE 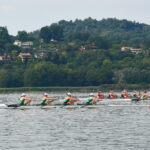 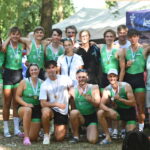