Three Irish athletes made the journey over to Hazewinkel, Belgium, for the U23 European Rowing Championships that took place over the weekend. There was great performances across the team, but it was Ciaran Purdy of Queens University Belfast Boat Club, that came home with the silverware, winning a silver medal in the Men’s Lightweight Scull.

Ciaran has added to his collection of medals, after winning silver at the U23 World Championships in Varese last July, in the Lightweight Men’s Double, and again this weekend in the scull. With only one crew to qualify straight into the A Final from the heat on Saturday, Ciaran was into the Repechage after coming second to Gian Struzina of Switzerland. In the Rep, later that same afternoon, Ciaran held a commanding lead throughout the race and won with a six second gap to the next sculler, confirming his place in the A Final. In an outstanding race, Ciaran came from behind in the A Final, sitting in fourth position right up until the last 500m. Winding it up coming into the finish, Ciaran put down the fastest 500m of any crew throughout the race, finishing his last 500 in 01:45,27. This last minute push brought him through the Swiss and Slovakian scullers to take the silver medal.

Niamh Coffey racing for University of Limerick Rowing Club, and originally hailing from Muckross Rowing Club, started off the racing on Saturday morning in the Women’s Lightweight Scull. Starting strong, Niamh won her heat and qualified straight into the A/B Semi, avoiding the Repechage later that afternoon. In a tough Semi draw, she just missed out on the A Final qualification finishing in fourth place behind Greece, Great Britain and Italy. Going out hard in the B Final, Niamh sat in second place behind the sculler from Slovenia. Putting in a strong second 500m, she made up the distance and rowed through the Slovenian sculler in the third quarter of the race. Niamh took the win in the B Final, a very strong performance for her first Irish representation.

Ryan Spelman, also a ULRC athlete, competed in the Men’s Heavyweight Scull. Ryan was due to race the scull at the U23 World Championships in Varese, however, had to withdraw before the competition due to illness. The Limerick sculler, who began his rowing career with St Michaels Rowing Club, put in a strong performance placing fourth in the B Final in a field of 16 athletes. In his heat, Ryan missed out on the straight qualification to the A/B Semi and was into the Rep on Saturday afternoon. Finishing in the top three spots in the Rep guaranteed his position in the A/B Semi the following morning. A fifth place finish in the Semi put him into the B Final later that day. In a tight final, with only three seconds separating first from fourth, Ryan finished in fourth position, tenth overall.

Congratulations to all athletes and to their coach John Armstrong, who also doubled up as Team Manager for the event. 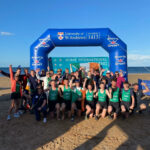 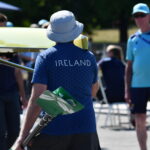