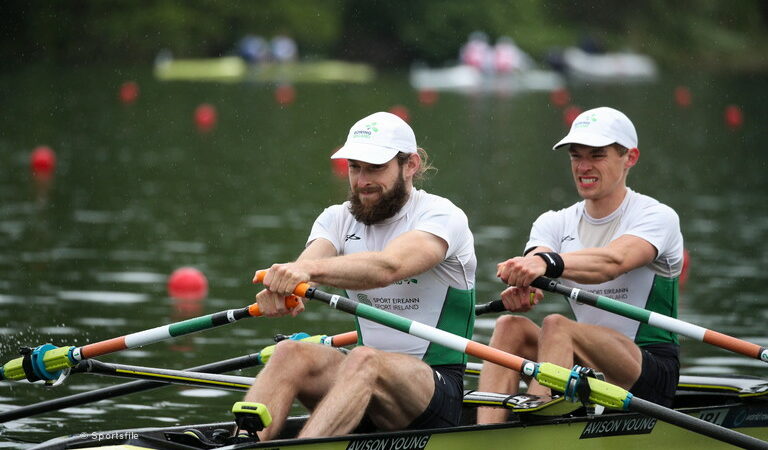 Jack Dorney, Alex Byrne, John Kearney and Ross Corrigan competed in the Men’s Four B Final, finishing third with a time of 06:16.20. The Irish boat sustained efforts throughout the race, competing against two Swiss crews and one Dutch crew. This result leaves the crew with a standing of ninth overall for this weekend.

Aileen Crowley and Monika Dukarska raced in the Women’s Pair A Final, resulting in a time of 07.22.17 for second place. Aileen and Monika’s efforts saw them take second place in the final 200 metres, earning their place on the podium with a silver medal.

Tara Hanlon and Claire Feerick also competed in the Women’s Pair A Final and placed fifth with a final time of 07:29.89. Both boats faced crews from Spain, Romania, Chile, and the Czech Republic.

Ronan Byrne and Phil Doyle raced in the Men’s Double Sculls A Final, placing second with a time of 06:19.05. Ronan and Phil faced tight competition from their Chinese counterparts, Zhang Lin and Zhiyu Liu, racing neck and neck from the 1,000 metres mark right up to the finish line. China edged ahead by 0.14 seconds, Ronan and Phil claimed the silver medal and a place on the podium.

Sanita Puspure raced in the Women’s Single Sculls A Final, coming third with a time of 07:30.02 to secure a bronze medal. Sanita closed ground in the final hundred metres of the race but was passed by American rower Kara Kohler as they approached the line. Sanita faced rowers from Austria, Switzerland, the United States, and Russia.

Paul O’Donovan and Fintan McCarthy placed first in the Lightweight Men’s Double Sculls Final A with a time of 06:15.48. Paul and Fintan claimed the lead in the first 900 metres, battling with the Norwegian crew Kristoffer Brun and Are Weierholt Strandli for pole position. The crew won Gold with a 14 metre lead in Ireland’s final race in Lucerne this weekend.

Rowing Ireland’s High-Performance Director, Antonio Maurogiovanni, said: “We are delighted to be taking home five medals this weekend. We have continued the momentum from the success of last weekend, with the additional two boats qualifying for the Olympics. I want to congratulate Paul and Fintan on their Gold Medal win and congratulate Lydia, Ronan, Phil, Sanita, Monika, and Aileen on their fantastic performances and medal wins.

We had eight out of nine competing crews make A Finals, and the Men’s Four gained great experience competing against crews at this level, which will benefit their future performance.

I want to thank all of our athletes, coaches, support staff, clubs and their families and friends for their continued support and dedication throughout the training camps and competitions. I also want to thank World Rowing and the organising committee for allowing our athletes to compete in a safe environment despite the ongoing pandemic.

There has been a huge amount of work put in by our High-performance Team over the last number of months in preparation for these competitions. We now look forward to preparing for the summer, and we all must work together and keep focused on what’s ahead.”

Rowing Ireland’s CEO, Michelle Carpenter said, “I want to congratulate all the athletes and team on their results this weekend. We are delighted to see five medals after all the dedication and hard work in training camp over the last months.

Well done to our High-Performance Director, Antonio Maurogiovanni, the coaches, support staff, and the athletes’ clubs and families. The support the team has is a substantial factor in their continued success. Now that we know where we are, we are looking forward to focusing on the important road ahead.”

Chair of Rowing Ireland’s High-Performance Committee, Neville Maxwell, said, “Overall we are very happy with the results of the Irish Team over the weekend in Lucerne. To come away with so many crews in A finals and five medals is a considerable achievement.

The group is now looking forward to having a quick rest and getting ready for the Tokyo Olympics, where further improvements will be made. We are delighted with the weekend, and Irish Rowing is in a good place.” 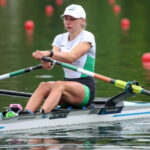 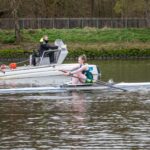