Racing returns on Wednesday morning, with four boats representing Ireland racing across a range of categories at the Sea Forest Waterway at the 2020 Tokyo Olympic Games. Days four and five were cancelled due to bad weather.

In the B Final of the Men’s Double Sculls, Ronan Byrne and Philip Doyle will compete for a final place between 7th-12th overall. The crew had a difficult beginning to the Olympics, finishing fourth in their opening heat. Moving to the repechage, the crew finished third, presenting a glimmer of hope for the pair as they moved towards the A/B Semi-Final, unfortunately finishing in sixth place. The crew will face Lithuania, Romania, Russian Olympic Committee, New Zealand, and German rowers in their final race of the Games. Their race will take place at 00:20.

The Women’s Four crew of Aifric Keogh, Eimear Lambe, Emily Hegarty & Fiona Murtagh fill take to the water competing in the A-Final at 01:50. The crew have seen success so far, finishing in second place of their Heat on Saturday morning, just 0.23 seconds behind the Australian crew.

Speaking to Team Ireland, Tara Hanlon, reserve for the Women’s Four, said: “It’s unbelievable to see the girls out there, seeing them in training each day, then going out on the water and showing what they’re made of. Coming up against Australia, it just shows their calibre, 0.2 seconds, there was nothing in it at the finish line.”

Next up, at 03:30, Fintan McCarthy and Paul O’Donovan will look to continue their success, competing in the A/B Semi-Final of the Lightweight Men’s Double Sculls. The duo finished 1st in their heat on Saturday morning, five seconds clear of the next crew. Fintan and Paul impressed the field when they launched out of the gates at 53 strokes per minute, without slowing to take the top spot.

In the Lightweight Women’s Double Sculls, Margaret Cremen and Aoife Casey will race at 03:40. Margret and Aoife had a difficult start, qualifying for the repechage in their first heat, in which they placed third, just 0.7 seconds shy of the field leader. They face Swiss, French, Dutch, British and Belarusian crews. A place 1-3 will guarantee them a place in the A Final.

The last race of the night is the A/B Semi Final of the Women’s Pair, the Monika Dukarska & Aileen Crowley race at 04:20. The pair placed fourth in their heat, leading them to the repechage on Sunday morning, placing thirs, and earning their spot in the A/B Semi Final. The crew will face British, Canadian, Australian, Danish and Greek rowers as they race for a 1-3 place, which will qualify them for the A Final tomorrow night. 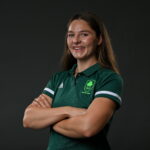 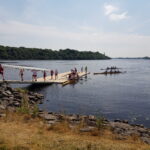