Team Ireland has officially selected thirteen rowers to compete across six boats at the Olympic Games in Tokyo this summer. The strength and depth in Irish rowing has been to the fore over the past number of years, with the Irish squad travelling to Tokyo as some of the most successful rowers on the circuit, containing multiple World and European Champions and medallists. The Olympic Rowing Regatta takes place in the Sea Forest Waterway and runs from the 23 July until the 30 July 2021.

“The Olympic Games are a really special competition, and as a rower it is often what you are driving towards. Each Olympic games is unique in its own way, with Tokyo being no exception, and as a squad we are going into them with high ambitions. We have worked hard since we set our Olympic goal, and it is nice to be officially selected ahead of the final weeks of preparation. Fintan and I are ready to push on and excited about doing some racing, and we can see that our teammates are equally driven and striving for excellence.”

“It is great to welcome such a large and high calibre group of Rowers to Team Ireland.  We didn’t imagine that we would qualify so many crews and to have genuine medal prospects within the team is even more exciting.  This is a day to celebrate what hard work, determination and high ambition can achieve.  It is also a time to acknowledge all of the people behind the scenes, key performance support staff who every day are working with the athletes and coaches to make them better.”

One of the key driving forces behind the success of the Team Ireland rowers is Performance Director Antonio Maurogiovanni,

“This is a big moment for us, and we are going to the Olympic Games with the largest squad of Irish rowers in history and with a record number of 6 crews qualified. I am very proud to be working with this group of athletes, coaches and administrators. Each of them has put in a considerable amount of work these past few years in preparation for Tokyo. The athletes and coaches’ dedication has shown how determined they are to represent Ireland at the highest level.

We all must remember that the majority of this team, coaches included, is at the very first Olympic Games, which confirm the excellent job that coaches and athletes have done. We’re a small country, but we’ve proven we can perform and achieve alongside the world’s best. As a team, we are not just satisfied to go to the Olympics to make up numbers, but we are going with the ambitions to be as competitive as possible.”

Rowing is the first competition on the Irish schedule of events, and World Champion Sanita Puspure the first Team Ireland athlete to compete in Tokyo 2020.

The Olympic Games in Tokyo will run from the 23rd July to 8th August 2021. 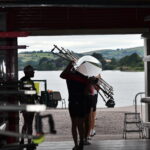 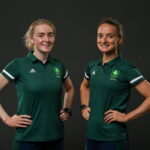