The Irish Times Sport Ireland Sportswoman of the Month for September has been announced today and rower Katie O’Brien claims the honours.

With an outstanding performance from the Para rower in the four-boat PR2 single sculls final, O’Brien claimed her place on the podium and a gold medal around her neck at the World Championships in Račice last month.

The Galway woman led from the start of the race to the finish, beating reigning world champion, Kathryn Ross of Australia, by 10 seconds.

Until this, O’Brien’s career highlight had been the World Championship bronze she won in Austria three years ago. The work she has put in since then has taken her to another level.

O’Brien’s achievements capped a hugely successful few days in the Czech Republic for the Irish team – along with Paul O’Donovan and Fintan McCarthy’s gold, there were bronze medals for Margaret Cremen and Aoife Casey in the lightweight double sculls and Sanita Puspure and Zoe Hyde in the double sculls.

Congratulations to Katie O’Brien a very deserving winner of The Irish Times Sport Ireland Sportswoman of the Month for September 2022.

Established in 2004 by The Irish Times, The Irish Times Sport Ireland Sportswoman of the Year Awards recognise the abilities and achievements of women in Irish sports. The awards run over a 12-month period, with the judges selecting a winner each month for her ability to excel at sport. The monthly winner is announced in The Irish Times Women in Sport pages which are published every Thursday. 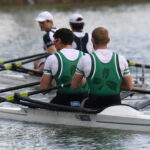