Two more medals are coming home to Ireland, with a Gold for the Lightweight Men’s double and a Bronze for the Lightweight Women’s Double. Tight racing had the two crews racing in the B Finals today finish in second position, narrowly missing out on the win as they both finished less than a second behind the winning crews.

Paul O’Donovan and Fintan McCarthy have done it again, winning gold and retaining their World Championship title. Ireland were the slowest boat off the start, crossing the first 500m in last position. All six boats were within just a second of each other so there was nothing separating them. The crew from Ireland were not in this position long, as the other crews began to settle into the race, Paul and Fintan held their speed, coming through all of the boats and crossing the halfway point in first position. Once they got ahead they were gone, continuing to move further away from the rest of the field. The Italian double put up a strong fight but would have to settle for the silver medals because it was Ireland taking home the gold.

Margaret Cremen and Aoife Casey had an incredible race and crossed the finish line in third position to take the bronze medals. The UCCRC rowers went off the start at rate 56, quickly settling into third position. Throughout the race Ireland went toe to toe with the French double, who won silver at the Tokyo Olympics. Coming to the last 500m, Ireland were in fourth position, just .17 of a second behind France. Winding up the rate into the 40’s for the last quarter, Margaret and Aoife had done enough to secure the bronze medal.

The Women’s Four of Emily Hegarty, Fiona Murtagh, Eimear Lambe and Aifric Keogh finished sixth in the A Final. Not getting off to the best of starts, Ireland had to push it on that bit harder to make their way through the crews ahead. This became more difficult as the race went on as the crews ahead continued to push on. For now Ireland are ranked sixth in the world, with much more to come.

The Women’s Pair of Tara Hanlon (UCCRC) and Natalie Long (Lee Valley RC) finished in second position behind the Czech crew in their B Fina this morning. Finishing the first quarter of the race in fourth position, Ireland continued to build throughout the race, passing the pairs from Spain and Australia. In an impressive sprint, Ireland were able to gain over two second on the leading crew, reducing the gap to just .55 of a second.

John Kearney, Ross Corrigan, Nathan Timoney and Jack Dorney were painfully close to first place in the Men’s Four B Final. Like the Women’s Pair, an incredible finish from the crew from Ireland allowed them to gain two and a half seconds on Germany, the leading crew. Finishing just 0.08 of a second behind them, Ireland will have to take eight in the world.

The Para Mixed Double of Steven McGowen and Katie O’Brien finished fifth in their A Final. Next year when looking ahead to Paralympic qualifications, they will need to make it into the top eight crews to get a ticket to Paris in 2024. Coming fifth in the world for a reasonably fresh crew, is most definitely a step in the right direction. 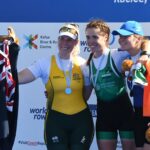 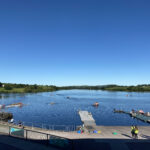