Five Irish boats competed on the final day of the World Rowing Under 23 Championships. Two Irish crews took home a Silver Medal, and out of six competing crews, four reached A Finals, and two reached B Finals.

Hugh Moore competed in the LM1x B Final, finishing fourth with a time of 07:18.71. Hugh led early in the race but was overtaken by the American and Danish boats after the 1,250-meter mark. Hugh narrowly missed out on a third-place by a tenth of a second to the German sculler.

Ross Corrigan, John Kearney, Alex Byrne and Jack Dorney won a Silver Medal in the M4- A Final. Ross, John, Alex and Jack started the race in front, but the Canadian boat closed the gap and took first place. Ross, John, Alex, and Jack finished ahead of the British boat to secure their Silver Medal with a time of 05:58.66.

The Coxed Men’s Four won Silver in the A Final on Saturday afternoon. Finn O’Reilly, Andrew Sheehan, Ryan Spelman, Adam Murphy and Leah O’Regan (cox) finished second behind the Italian crew. They competed against crews from the USA, Germany, Italy, Nederlands, and France. They finished with a time of 06:12.84 to take home the Silver Medal.

Rowing Ireland’s High-Performance Director, Antonio Maurogiovanni said, “I want to congratulate all of the athletes and coaches on their performances and results in the U23 World Championships this week.

We had six crews competing this week and out of the six, four reached the A Final and two crews reached the B Final. The Coxed Men’s Four and Men’s Four both won Silver in races with very tough competition.

Thank you to all the athletes, coaches, clubs, and their families for their commitment and hard work in preparation for the World Championships.

The team was well coordinated by the Coaches Coordinator and their Team Manager and all put in a large amount of work over the last couple of months and we are proud of their performances and results. Their passion and enthusiasm has been evident throughout their training camp and competition.

All of theme deserve a big well done!

I look forward to seeing these athletes develop further and reach their potential in the next number of years after training as well as they did at the National Rowing Centre.”

Rowing Ireland’s Chief Executive Officer, Michelle Carpenter said, “I want to congratulate our pathways athletes and team on their fantastic results this weekend. We are thrilled to see the crews perform to such a high standard and take two silver Medals back to Ireland.

Congratulations to our High-Performance Director, Antonio Maurogiovanni, the coaches on the ground, support staff, and the athletes’ clubs and families.

Our rowers have been training hard in the National Rowing Centre, and they deserve this success from their commitment and dedication.

We look forward to watching and supporting their pathway as they grow and develop in their athletic careers.

A special thank you to our partners Sport Ireland, Sport NI, our sponsors, clubs and rowing friends who continue to support and develop Irish rowing. We should all enjoy the success and performances as we look ahead to a busy summer for Rowing Ireland domestically and internationally.” 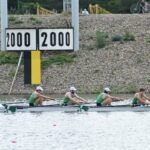 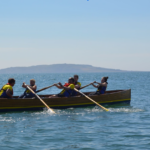 10th of July Regatta Round Up